I've often been intrigued by the moon. When I was a teenager I had a (very) modest refractor telescope and would spend parts of evenings outside in the cool inviting mosquito bites as I looked at the moon, jupiter, saturn and venus. I could identify a fair proportion of the southern hemisphere night sky (well, that "fair proportion" was probably 5% of what was visible).

But back to the moon: Around 250,000 miles from earth, sufficient to give light at night for at least half of the month, exactly the right relative size and distances from the earth and sun to provide eclipses, powerful enough even though inert to provide tides through gravity.

But some of the things that have intrigued me the most are the phases - waxing and waning, gibbous, crescent, full, new. It wouldn't have been to difficult to figure out - if something that is waning is in decline then a waxing moon is increasing. And I get the shape of a crescent, and any dictionary will tell you that gibbous means larger than a semi-circle yet not full circle.

So, pictorially here are the phases of the moon: 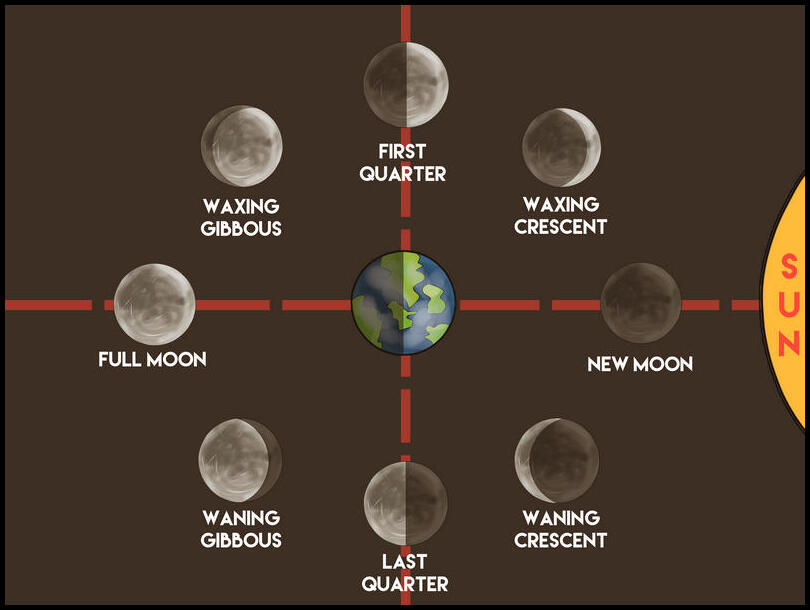 The image is used under Creative Commons and comes from here.

Another thing: How can you tell if the moon is waxing or waning? Depends which hemisphere you're in. In the south a waxing moon looks like an open parenthesis ( and a waning like a closing parenthesis )

If you can't remember that, don't let it phase you.